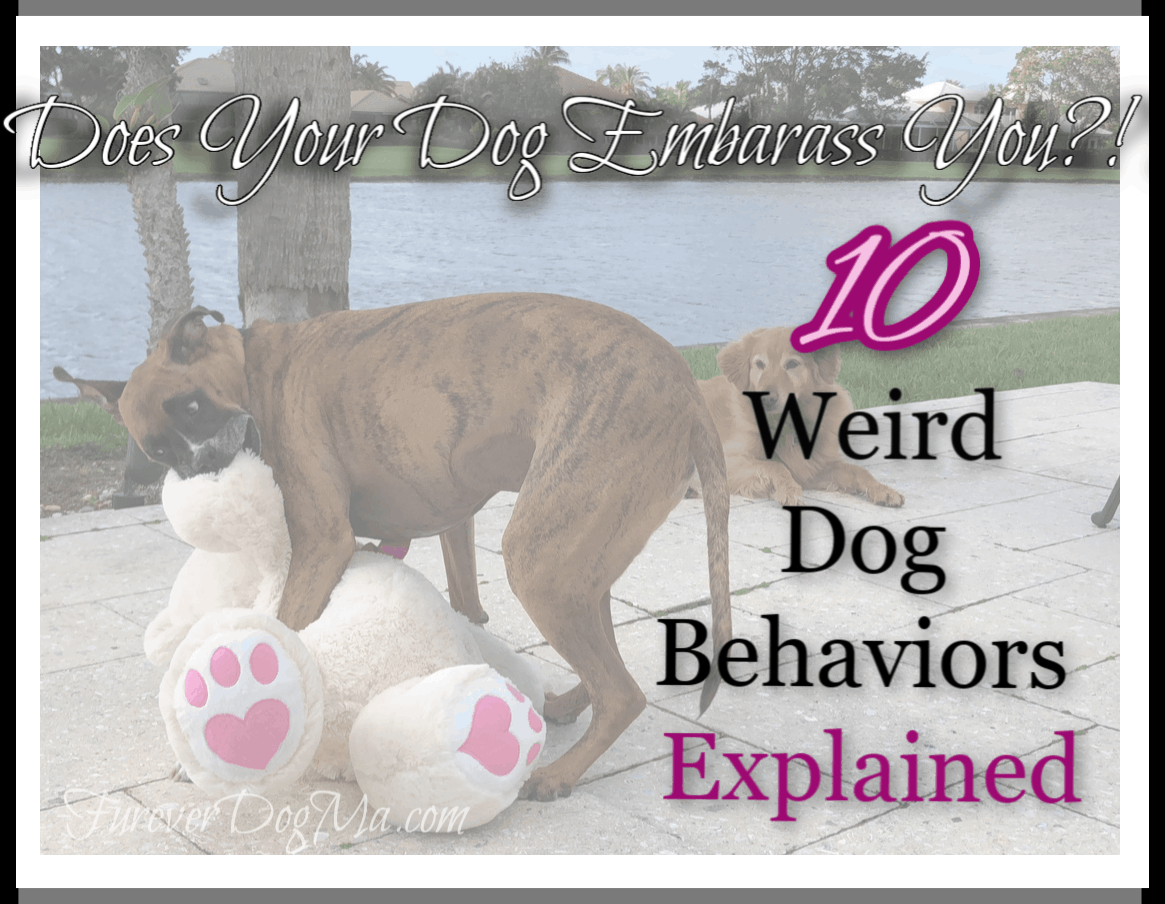 Dogs do some strange things, I think we can all agree on that! Why do they insist on smelling every butt, human dog, or cat that crosses their paths, or why do they sit and stare at you like some crazy stalker or potential serial killer? Weird dog behaviors tend to confuse their owners daily and it’s time to figure out why dogs do what they do.

Have you ever had a dog just sit and whine at you? That is our Thor in a nutshell. He will literally stare you down while whining and sometimes he makes this really weird barkish thing too. After years, he’s going to be 7 this year, of trying to figure what it means out, we’ve finally come to the conclusion Thor is broken…LOL! No, not really, but he definitely WANTS something! It’s not anything specific, while I’m sure at that moment he wants something specific, it can be a request for a whole bunch of things. He does this when he wants to go outside, he does this when he wants attention, he even does this to inform me that he has lost his bone under the couch and needs me to retrieve it.

I have put together a little list that I hope helps you decipher your dogs weird behaviors. So here it is my top 10 weird dog behaviors, in no particular order.

Dogs of all types love the butt drag. They look like they’re sitting, but instead of sitting and be the perfect angel you know they can be they, begin to smear their anus all over your floor! WHY?! They do this for a few reasons honestly. First, the simplest, is they have feces stuck to their bottom and it itches. Second, dogs have little sacs on each side of their anus called anal glands. These glands contain chemicals that convey to other dogs he’s a dog. These glands can sometimes become inflamed or infected and to try to relieve the pressure they scoot along the ground. Thirdly, worms! Worms make the anus very itchy. If your dog is constantly dragging his butt on your white carpet it perhaps is time to see the vet.

Let’s stay at the business end of the playing field for a moment, has your dog ever scratched and kicked at the ground after they have relieved themselves? It’s the weirdest thing, like they’re winding up to take off or something. They’re not. In reality they are marking their territory with little scent glands located on their pads. Kind of like saying Fido was here now this belongs to Fido. This is a totally normal behavior and there really isn’t anything you can do to break it, it is instinctual.

Wouldn’t it be weird if we went around smelling each other’s butts instead of shaking hands? Dogs wouldn’t find it the least bit odd. As weird as it seems to people, the dog’s way of greeting is much more effective and informational. It would be nice to know if someone is a jerk before saying, “hi”, wouldn’t it? A dogs butt is like a portable autobiography that other dogs get to read before interacting with the front end thanks to two glands located on each side of the anus. These glands hold chemicals and pheromones that convey so much information about the sniffed to the sniffee. A quick whiff tells the sniffee the gender, reproductive cycle status, genetic information, health, diet, temperament, and even emotional status. It’s seriously like a super power.

Well… we wish it was a guilt face. The truth of the matter it is a fear response purely a result of their human getting upset. When you (the Alpha) raise your voice, you’re asserting your dominance and your dog gets frightened and lowers his body, droops his ears, sometimes makes a funny smiley face all to show you their subservient. It has absolutely nothing to do with the garbage strewn all about the kitchen or the hole he chewed in your brand-new mattress.

Humping is probably one of the most annoying of the weird dog behaviors , they will hump practically ANYTHING! As a kid I had a female Shih Tzu that humped stuffed animals and pillows. Kept me laughing for hours, but why did she do it. While making puppies is one reason humping occurs it isn’t the only one. There are several other reasons why dogs engage in this behavior. First, it is what it looks like…masturbation. Yes, dogs hump because it feels good. Secondly, some dogs get over excited either engaging in or watching other dogs play. When they’re over stimulated and don’t know what to do with that extra oomph, they hump. Thirdly, it’s a natural for of play (as long as it doesn’t upset the other dog). The fourth cause is a little more serious.

If your dog is having difficulty urinating due to a urinary tract infection humping may be relieving some of the discomfort and pain.

This behavior can really hurt the pocketbook, but we did domesticate a predator so we kind of got what we asked for. Dogs have a deep seeded instinct to kill things whether it is a bunny running in a field or a stuffed bunny sitting on the floor. Dogs who are bored or have a strong play drive (aka prey drive) tend to be hard on toys. Little Bunny FooFoo might not be the only victim, couch cushion, furniture legs, anything really can be ruined by this behavior.

If your dog spends a lot of time alone or is just a bored high energy dog try to exercise him hard for an hour. Working off that excessive energy can really quell that destructive side. Puzzle toys work wonders to make the brain tired, too.  However, if your dog destroys his toys simply to sate his killer instincts you will need a stronger toy.

For the same reason a human infant sucks on a pacifier, a dog sucks on a blanket (or a foot), comfort. The “comfort suckle” happens more in dogs who were orphaned or too early separated from their mother. Normally, even after the mother’s milk dries up puppies still suckle because it’s comforting, it’s what they have known, and as they get older they progressively don’t need to suckle from mom to relieve stress or receive comfort and the behavior stops.

Have you ever seen a puppy take off at like Mach 9? Zooming from one end of the house to the other with his butt tucked? Whether you love the zoomies or you hate them, you pup is pretty much saying, “OMG! OMG! I’M SO HAPPY I JUST CAN’T CONTAIN MYSELF” It’s best to sit back and watch the show. Sometimes though the zoomies don’t wait until your pup is safely contained. If your dog catches a case of the zoomies while off leash whatever you do, DO NOT chase him! Chasing can be interpreted as you playing taking a bad situation and making it worse.

Dogs have become synonymous with burying bones, and it’s true, some dogs really like to bury things. bones, food, your sneakers you name it. This behavior comes from their instincts. Even wild canines know if they bury a carcass it may be there when they come back. If you overfeed your dog they may start to stock pile food reserves for a rainy day. Sneakers on the other hand they may bury just to get your attention.

Face licking is either the most hated dog behavior or the most loved. I personally love it when my dogs give me kisses. In wild packs, face licking is a normal societal behavior. They lick to request food, to show they are submissive, to appease another pack member, or simply to groom. Well, you are now your dog’s pack and with it comes the lick for all the same reasons.

We make the mistake a lot of times of trying to conform the dog to human standards, anthropomorphizing if you will. That leads to confusion with these weird dog behaviors. Understanding dogs and why they do what they do will undoubtedly help us better handle certain situations and make cohabitating a bit easier.

The fact is, we’re not dogs, so we don’t understand why they do what they do. As much as dog people and behaviorists will tell you for a fact that they have these behaviors figured out they don’t really. We do however have some really sound theories based on some pretty good, but fallible science. Regardless, there are some really weird dog behaviors