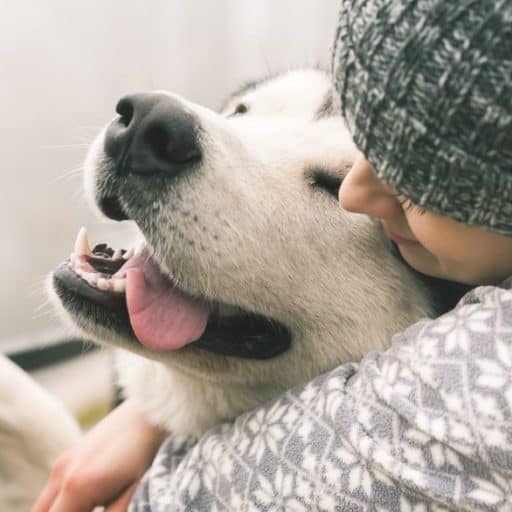 Is our favorite way of showing affection silent torture for our precious dogs? There is nothing worse to us loving dog parents than the thought of us doing anything that makes our furbabies sad or uncomfortable, but, unfortunately, the science shows the answer to be a resounding, YES! Are you shocked? People don’t always like hugs either. We have all gotten stuck in one of those long unending awkward hugs, right?

Looking back now with the knowledge and experience I have gained over the years I have developed a profound sadness for my first dog. It was quite a love hate relationship, I used to think of her as the evilest little dog. My very first dog was a shih tsu my mother bought me for my 5th birthday, Wendy. She grew up and I loved her well, like any child does. She had all the hugs in the world, and she was the nastiest dog. She hated kids!  She bit every one of my cousins, every one of my friends, any kid who made the mistake of getting their faces too close. In reality she was probably just feeling scared and trapped with her only means of escape being to nip.

Most humans are huggers and our indoctrination into the love of hugs goes way back to our infancy. As babies our mothers hold us tight to their chests often to feed and soothe us. It has been documented that oxytocin, a hormone associated with loving and bonding, is released by both children and their mother’s babies being hugged by their mothers. So when we hug our bodies are flooded with a warm loving sensation- no wonder we love to hug- but dogs aren’t people.

In 2016 Dr. Stanley Coren’s study on dog hugs was published in Psychology Today. He studied 250 random pictures of owners hugging their dogs. Only pictures where the dog’s face was clearly visible and no other stressors were present. The pictures were then scored on three criteria: the dog was showing one or more signs of stress or anxiety, the dog appeared relaxed or at ease, and if the dog’s response was ambiguous or neutral. Coren concluded that 81.6% of dogs showed signs of stress or anxiety and only 7.6% showed comfortable dogs, leaving 10.8% of dogs open to interpretation or neutral. This got me thinking of my three goldens. I have known that hugging or restraining a dog can cause stress for years, but after I read Dr. Coren’s report I wanted to see how my dogs reacted to a simple hug.

Our three golden retrievers, Thor, Khaleesi, and Salem are always up for what we call, a smush session. They are attention hounds and melt at the slightest display of human affection. My thought, or hypothesis, when I decided to take the pictures was that Salem and Khalessi would either enjoy dog hugs or be neutral. Thor, I was sure, was going to show stress signs.

Our Dog Hugs: The Process

Pictures weren’t going to tell me everything I wanted to know so, I did something a little different. Dogs are pack animals and in our pack my husband and I are alpha, and my children are above the dogs in the hierarchy. I decided that in order to really tell if my furkids were uncomfortable during a dog hug I would have my husband hug them as well as one of my children. Then I thought of body language, what was the hug saying. We took two hug positions, the first from under the neck to demonstrate a more submissive or playful posture while our second was a hug from above to mock a dominant stance.

Salem is a 16-month-old male who is happy all of the time, never fearful, and always inquisitive. He is constantly wanting attention and has no understanding of personal space. This dog will jump on the bed, lick you to death, and then just flop on top of you with no second thought. The most precious thing he does is give you a dog hug, he pushes his forehead into your body and will stay there for minutes on end. Because he is such an affectionate dog and loves physical attention, I was sure he would have no issue with hugs.

When my husband hugged him in our first position Salem seemed very relaxed, he even leaned in a bit. He, as I assumed, showed no signs of stress. I had my daughter then hug Salem from below, and again he was very relaxed and seemed to even enjoy it.

Next, we tried the hug, bending over the dog and hugging around the neck. My husband was first and immediately you could see that Salem’s eyes closed. When my daughter attempted this same stance, Salem displayed a “whale eye”, eyes opened wider with the whites of his eyes were showing and had a more, “what are you doing?” look on his face. He wasn’t sure what was happening and therefore was a bit stressed.

Khaleesi is a 4-year-old female who is coming into heat. She has a much more needy disposition, if you sit on the floor she is in your lap, if you,re on the bed she is laying with you, she always HAS to be with someone. Much like Salem, you can do anything to this dog and she is happy, however she is a bit more cautious when in new situations than he is. My initial thought was that she would relish in the attention and contact of the dog hug.

With Khalessi’s first hug, (again from my husband mimicking a submissive posture), it was apparent she was not really liking it. Her eyes were closed, and she began licking her lips. When she did open her eye they were more of a squint. Her ears were held closer to her head as well.

During my husbands above dog hug, or more dominant position, Khaleesi actually seemed more relaxed. She still was a bit nervous, but her eyes were no longer slicked back, she didn’t lick her lips, and her eyes were nice and open. This all changed when it was my daughters turn. Khaleesi was much more uncomfortable displaying wider eyes, a head turn, and the lip licking returned.

Thor is our old man, he just turned 7 this year. He is constantly wanting to play and brings you his bone. A very vocal dog, Thor will bark at anyone who has the bone for too long, it needs to be thrown. He loves to get pet but is very quick to leave a situation where he is uncomfortable.

We started out like everyone else. My husband gave the first dog hug from beneath and immediately the white of Thor’s eyes were showing and his ears were down. The second hug from above was much harder to even get done. Whenever my husband bent over Thor and reached around Thor would immediately drop down into a lay position and try to roll over. He was definitely uncomfortable and stressed in the second hug. You could almost see him chanting, “ESCAPE!”

We had my daughter hug Thor from below and had the same result, wide eyes, raised eyebrows, and dropped ears. With Thor’s reaction to my husband, my daughter chose to approach the second hug from more of the side position. He again showed signs of stress and anxiety.

We make the mistake of personifying our dogs, thinking of them in terms of human expression. The truth is, when we choose to bring a dog into our lives, we have to begin to live in the dog’s world not force them to conform to human rules. Though we have a lot in common and coexist exceptionally well, dogs and humans have different forms of prime communication. Dogs first form of communication is body language, not yips and growls, and they interpret our body language as their own. Consequently, we need to understand and learn to speak to them in the language they understand. Otherwise bad things can happen.

Dogs do not hug each other, ever. In fact, the only time dogs restrain one another is when they are asserting their dominance. In wild canines the alpha dog will assert dominance by putting their paws on the shoulders of the less dominant dog, much like a human hug. The subordinate dog’s instinctual reaction is to move away allowing the boss to have their way. If they don’t they are normally met with aggression. Hugs don’t allow your dog to honor his instincts of retreat, you’re restraining them.

Dog Hugs Can Cause Problems

Hugs don’t make every dog comfortable; some just tolerate them and very few actually enjoy the dog hug. According to the study dogs mostly showed subtle signs of stress such as: turning their heads away, closing eyes, eyes wide white whites showing, ears lowered or slicked back to head, lip licking, licking the person’s face, raising one paw, but stress reactions can be as serious as a bite. Bites can be horrific! Young children are notorious for hugging dogs which can become a disastrous situation quickly. The last thing kids are looking for when they hug a dog is stress signs. It is imperative that children be taught the correct way to handle dogs and show affection.

What to do Instead of Giving Dog Hugs

Just because dog’s don’t like to be confined in a tight embrace doesn’t at all mean you can’t still “hug” them. Rub their ears, pat their tummies, do what your dog loves. Our dogs love to have their heads pulled into our chests as we rub their ears. You can still embrace your dog too just don’t make them feel trapped. Leaning is a great way that even dogs in the wild use to show affection, so, lean into him and scratch his sides or his ears.

We can’t force dog’s to act human, when we do we open the door to trouble. Dogs will never be able to conform fully to human standards, although they do tolerate a lot. Dog hugs aren’t the only area we try to force dogs to fit into our world. When we bring a dog into our families, we have to respect them on their terms; to speak dog. So, next time you want to love on your pup remember to watch for signs of stress and keep it on their terms.