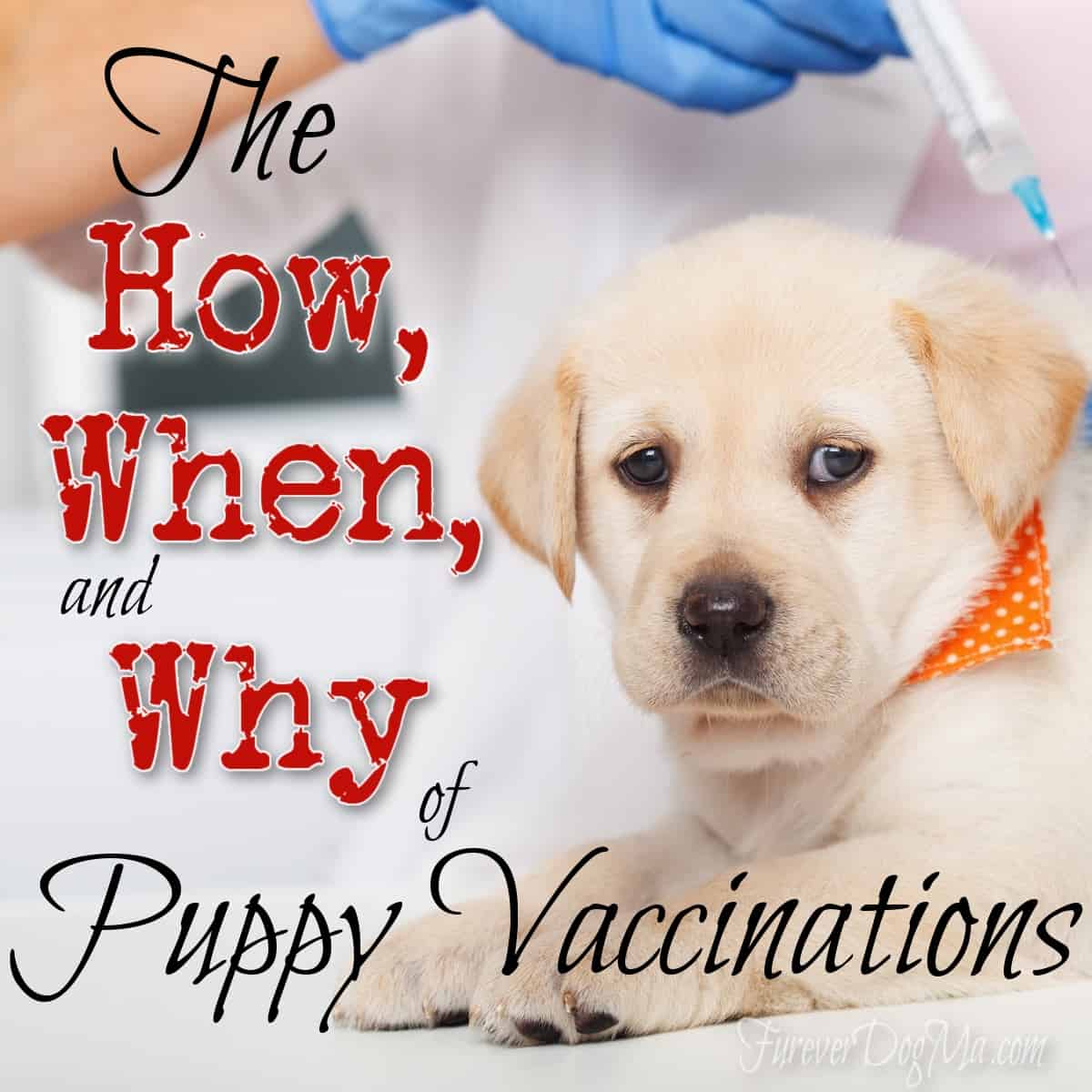 Bringing a new puppy home is probably the most exciting event for a family. The new little fluff ball is full of energy and love. While the ample kisses and adorable games are wonderful, you want them to last for years to come. You want the best for this new little life, the best food, the best toys, the best training, and most of all the best vet care to ensure he is with you for the long haul. One of the most important building blocks of a healthy puppy are puppy vaccinations.

I know vaccinations are a controversial subject, but I have seen firsthand the outcome of ignoring them. My sister loves her dogs but once the anti-vaccine movement really took hold, she decided that she didn’t want to risk vaccinating her dogs any more. She and her young son brought home two puppies, a female Layla and a male Gator. Neither had been vaccinated and she did not plan on vaccinating.

Unfortunately, both of the puppies came down with parvovirus within a couple weeks of coming home. First Layla had stopped eating then came the diarrhea. Gator started exhibiting symptoms shortly after. The disease progressed rather rapidly. Within 24-hours both puppies were extremely dehydrated and rushed into the emergency hospital. Both were treated with intravenous (IV) fluids and medication to stop vomiting. Layla unfortunately died within the next couple of days, Gator underwent treatment for over a week, but luckily survived. The trauma of the loss will scar her forever.

Why Are Puppy Vaccines So Important?

Puppies are born with an immature immune system so to prevent newborns from getting sick mamma provides temporary immunities. This passive immunity is passed on to babies through their mother’s colostrum, or first milk, and can last for a couple of weeks to four months against certain deadly diseases. A puppy builds it’s own immune system in two ways being exposed to an illness or through a vaccination. The unfortunate side effect of allowing their immune system to grow naturally is some of the disease are deadly and much easier to prevent than to treat.

What Puppy Vaccinations Should You Get?

Canine parvovirus (CPV) is a highly contagious virus that can affect either the digestive tract or the cardiac system. The parvovirus can live outside on the ground for up to a year. It can be tracked into your home on shoes or other objects and is extremely hard to kill.  Administered as part of the DHPP vaccination. While an adult dog is able to survive intestinal parvovirus it has a high fatality rate among young puppies. It causes severe diarrhea (sometimes bloody), vomiting, lethargy, lack of appetite, either fever or hypothermia, and extreme dehydration. The parvovirus can attack the cardiac system in puppies and even fetuses in the womb. This form is often fatal.

Canine distemper is caused by a paramyxovirus, another highly contagious virus that is transmitted through the air. The beginning stages of distemper mimic other illnesses but as it progresses classic neurological symptoms present. Distemper is very hard to treat and most times is fatal. Administered in the DHPP combination vaccination.

Rabies is a viral infection that is transmitted through the saliva of an infected animal. Virtually all mammals are susceptible to rabies including humans. Rabies is an incurable disease that has a 100% fatality rate. Due to the ease of transmission and the mortality rate most states have laws requiring rabies vaccinations.

Due to exposure risks non-core puppy vaccines may be recommended by your vet as core vaccinations.

Bordetella bacteria is highly contagious and is the most common cause of “kennel cough.” Dogs with Bordetella experience severe coughing, whooping, vomiting and in severe cases seizures and death can occur. Because of the easy of transmission and the possible devastating effects most doggie daycares, training facilities, and boarding kennels require this vaccination. This vaccine is available in both an injectable and nasal application.

Like Bordetella Leptospirosis is caused by a bacterium. Antibiotics are effective fighting the infection and the earlier given the better to lower risk of lasting complications. Leptospirosis is caused by a zoonotic bacterium meaning it can be spread between dogs and humans. Leptospirosis causes some pretty sever problems such as fever, abdominal pain, vomiting, diarrhea, loss of appetite, severe weakness and lethargy, stiffness, jaundice, muscle pain, infertility, and kidney and liver failure.

Lyme is a debilitating disease caused by bacterium transmitted by a tick bite. Unlike in people dogs do not get the telltale bulls-eye rash indicating Lyme transmission. If caught early enough Lyme can be effectively treated with antibiotics, but more often than not Lyme is not caught timely leading to multi-system issues.

Canine influenza is a relatively new virus that causes upper respiratory symptoms such as sneezing and coughing. Consequently it is easily spread through the aerosolized respiratory droplets. Similar to the human flu vaccine canine influenza vaccination is optional.

Canine coronavirus is specific to dogs and does not affect people. Dogs will experience intestinal distress such as diarrhea, vomiting, and lack of appetite. Sometimes respiratory symptoms are also present. Without vaccination the virus must run it’s course which can result in severe dehydration in young puppies.

When to Get Your Puppy Vaccinations

It goes without saying that your new puppy should see a vet within a week of pick-up to make sure of their overall health. Each clinic has a different schedule for puppy vaccines but every clinic follows the American Animal Hospital Associations recommendations. Your vet will set you up on a vaccination schedule that will help keep your new baby healthy.

It takes a while to build up the immune system. It’s not just a shot and he’s 100% protected. It is recommended that a puppy doesn’t visit dog parks or other public venues where dogs frequent until they receive their last set of vaccinations. As a breeder I do not allow anyone to even visit our home until the 1 week after the puppies receive their first vaccinations. Parvo, distemper, or any of the other diseases could potentially (and have) wipe out a whole litter.

Keeping your puppy safe and healthy is your very first priority. Vaccinations are the cornerstone to a long happy life with your new furry friend. Yes, there are risks to vaccinating but the risks do not outweigh the risks of the diseases they prevent. Watching your once energetic puppy fade and cross the rainbow bridge is a real possibility of not vaccinating.