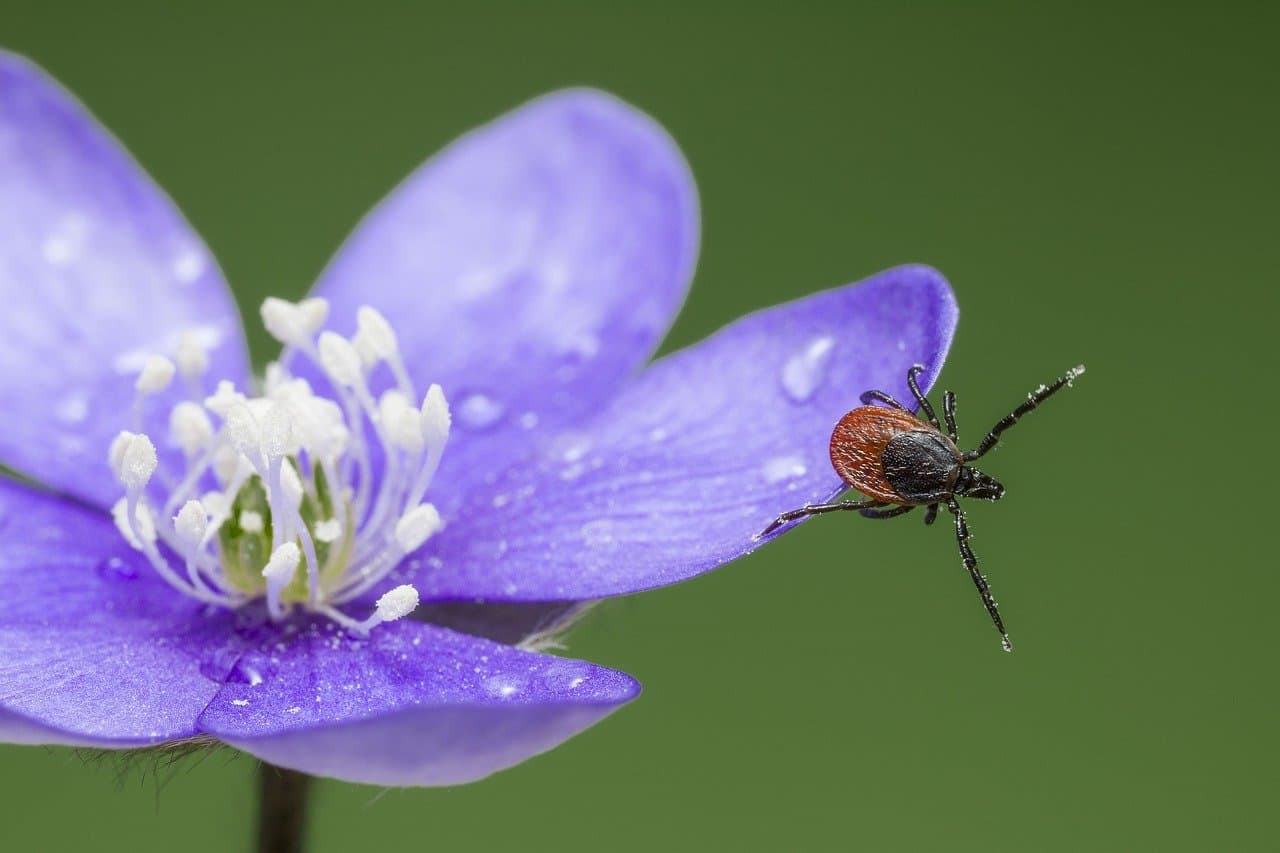 It’s easy to get really complacent about flea and tick prevention especially during the cold winter months. Don’t think just because the weather has turned on you that it is safe to let your guard down against these buggers. If you were dealing with just fleas you may honestly get away with it, but ticks on the other hand are pure evil and always seem to be an afterthought. Did you know ticks carry more than just Lyme disease? I was shocked too! What was more shocking though is that the tick can still be active outdoors during those months!

Ticks are actually not a bug but an external parasite belonging to the arachnid family along with spider and scorpions. These guys feed off the blood of their animal host. Since a tick cannot jump, they “quest” to find their food. Climbing up on vegetation they wait for an unsuspecting passing animal to latch on to.  The most common species of ticks found in the United States are the black legged tick (deer tick), the brown dog tick, the American dog tick, and the Lonestar tick.

Ticks being their lives as larvae that hatch from eggs once the weather warms in spring. These 6-legged baby ticks also known as seed ticks immediately begin looking for their first meal usually an unfortunate mouse or some other small mammal or reptile. Once they finish feeding, they drop to the ground and await their first molt (shedding of their exoskeleton). After the first molt the larvae is now an 8-legged nymph and ready for their next meal. Nymph stage ticks prefer larger host animals such as racoons and opossum and repeat the feed, fall, and molt cycle. By fall in their final stage of life, as an adult ready to breed, an even larger host is preferred such as a dog, deer, or human. The tick will engorge itself and then breed on the host only dropping to the ground to lay their eggs and then crawls off to die. The time frame on the life stages of ticks is totally dependent upon the climate and the species. Some ticks develop in a very short time frame while others may take several years.

Why Are Ticks So Dangerous

According to the American Kennel Club Canine Health Foundation (AKCCHF) there are seven, SEVEN, major tick-borne diseases that affect dogs. That is scary! On top of that a tick can infect its host with multiple diseases with one bite! Let me layer some more bad new on this topic, the major diseases dogs can get from ticks can be passed on to humans if bitten by the same tick. Tick prevention plays a major role in preventing these diseases in both dogs and their humans!

Someone would have to be living under a rock to have not heard of Lyme disease. Transmitted by the black legged tick (deer tick) this is a devastating disease caused by the bacteria Borrelia burgdorferi. Symptoms only occur in 5-10% of those infected and usually don’t present until 2 -5 months after the initial bite and include swollen stiff joints, stiff gait with obvious discomfort, fever, loss of appetite, depression, lameness, fatigue, swollen glands, and difficulty breathing. If left untreated this condition can lead to kidney failure, neurological, and cardiac damage. Thankfully there is a vaccination available to help prevent your pooch from contracting Lyme disease.

Also known as the Dog Tracer Disease or Canine Hemorrhagic Fever this disease is commonly transmitted by the brown dog tick. According to the AKCCHF ehrlichiosis is the most common and one of the most dangerous tick-borne illnesses to affect dogs and there is no vaccination. There are three stages of this disease acute, sub-clinical, and clinical. The acute stage is the beginning stage dog will exhibit a fever, loss of appetite, weight loss, runny eyes and nose, nose bleeds, swollen limbs, swollen lymph glands, and abnormal bleeding and bruising. The sub-clinical period the dog may show no symptoms but as they progress to clinical stage begin to significantly worsen. Anemia, abnormal bleeding, neurological damage, vision disturbances, and in the worst cases bone marrow damage leaving the poor pup unable to produce blood.

This is a disease that is found throughout the Americas. It is spread by multiple tick species, the Lonestar tick, American dog tick, and the wood tick.  Symptoms of Rocky Mountain Spotted Fever are fever, stiffness, neurological issues such as a wobbly walk, muscle and joint pain, abdominal pain, vomiting, diarrhea, coughing, swelling of face or legs, and small bleeds in eye and gums. Sever cases can lead to death.

Transmitted by the brown dog tick barbesiosis causes lameness and fever. If left untreated can cause heart or liver disease.

This illness is spread by the brown dog tick and the Gulf Coast tick. Unlike the other diseases the dog actually has to ingest the infected tick. Hepatozoonosis can cause your dog to have a fever, runny nose and eyes, muscle pains, and diarrhea containing blood.

Thankfully we don’t live in the middle ages anymore and multiple options for tick prevention are affordable and easy to use. However, it’s easy to get complacent about flea and tick preventions especially during the cold winter months. Don’t think just because the weather has turned on you that it is safe to let your guard down against these buggers. Unlike fleas who die in the cold months without a warm host, ticks (who’s place in ecology I don’t quite understand) are pure evil! An adult tick will hide in leaf litter or garden debris and go dormant even in the coldest of winters. However, on those nice winter days where temperatures climb above freezing, they come to life and go questing for their next meal. I didn’t think these things could get any creepier, but they did. Don’t get me wrong fleas are a pest in their own right and can transmit their fair share of diseases, BUT they will die off or go dormant as the cooler weather sets in. Regardless keeping your pet on year-round treatment is necessary.

Ask Your Vet Which Tick Prevention Is Right For You

Keeping you and your pet safe is priority. Available in many different forms topical, oral, chewable talk to your vet about which would best suit your pup. Some repel ticks others are systemic meaning they kill once the tick has bitten. Whichever you choose they all will help keep you and Fido free of diseases .If a tick is carried into your home by your beloved pooch and you remove there is a possibility of the tick falling off inside and infesting your sanctuary with more of these unwanted parasites. Tick preventions are.

Most everyone has their pet on some sort of flea prevention and ticks are an after thought. Make sure that your chosen prevention affects the ticks native to your area.